Creative Outlets: Portrait of my Mother as an Artist 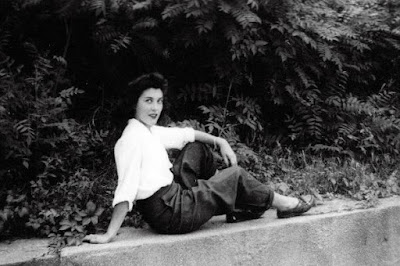 How one suburban mom lived an artful life

My mother was an artist at a time when choosing to be an artist, particularly a woman artist, was not as common as it is today. She grew up poor, the eldest of three daughters born to first generation Jews. They made their way from Brooklyn to the suburbs, taking their culture and their struggles with them. Her mother’s family was from Germany and her father’s family emigrated from Belarus, though neither side imparted a particular reverence for art. She had no toys while growing up, she always told me, but found amusement, talent and her identity through drawing.

She was skilled enough to gain entrance to Pratt Institute and her certificate from the 2- year commercial art program led to a coveted job at Life Magazine in the layout department.
This was the Henry Luce era of Life, when Gordon Parks, Robert Capa and Margaret Bourke White all worked for the magazine during the war years.
The camaraderie was strong there and the hard drinking and hard working climate was probably very heady and seductive to a girl in her twenties from a sheltered background.

When her father died two years before she married, her earnings helped support her mother, but after my brother was born she left full time work for good and settled into motherhood on Long Island. It was in most ways a happy compromise, trading her career for the security and pleasures of domestic life. In the suburbs, she found creative outlets.
For my father who owned the local hardware store, my mother not only decorated the storefront windows, but also painted signs and designed the annual sales catalogues. In my mother’s hands, these catalogues, illustrated with Early American advertising graphics were uncommonly tasteful for mailers selling fertilizers and lawnmowers.

Pre-digital production involved literally cutting and pasting text and images onto boards for printing, using T-squares, triangles, razor blades and rubber cement. During the spring catalogue season, long hours were spent working at the drafting table my father had built for her.
For me, she made beautifully smocked dresses and for my brother, she painted cowboy murals on his bedroom wall. Our birthday parties had imaginative themes (Hat making! Costumes!) and were art directed with elaborate decorations and table settings worthy of a food stylist…I have the 8mm movies to prove it. She volunteered for the PTA and was a Cub Scout den mother.

For herself, my mother’s insatiable curiosity and love of nature led her to study wildflowers, rock gardens and birds. She befriended naturalists across many disciplines: Renowned herbalists, birders and members from the rock garden society. She never left home without binoculars in the glove compartment for bird- watching and a small shovel in the trunk in pursuit of wildflowers she could transplant to her garden. She was a good student, an overachiever, in all endeavors she undertook. To feed her interest in art, she enrolled in art history classes at the community college and went to museums and galleries in the city, always returning home with postcards and catalogues. When I was older, I often found her at the dining room table late into the night pouring over art books or identifying plants in her guidebooks. These were the years when my mother was able to get by on four hours of sleep a night. At home, her library grew to match her interests.
My mother was an amateur in the original sense of the word. Her curiosity was deep and real, and her love for art, nature and family all coalesced into a good life.

When I began kindergarten, she started to take painting lessons, first from Mrs. Morehouse who lived down the block from us and offered lessons in portraiture. This served my mother well as she would often set up her easel at outdoor art shows and sketch children for extra income. 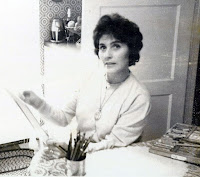 After portraits, she graduated to landscape painting with George Gách, an émigré with a continental accent and an impressive resume. He brought his students to picturesque locales: docks on the bay in Port Washington and estates on the wealthy North Shore, where I recall (when I was allowed to tag along) crossing lawns to vine covered arbors which led down to the Long Island Sound. Paintings of boatyards began accumulating around our house next to the oil studies on canvas boards of people we had never met. After studying with Mr. Gách, she moved on to Paul Puzinas, a painter who set up lush still lifes in his studio featuring musical instruments and large green glass decanters wrapped in rustic woven baskets. Paintings rendered in broad brushstrokes with autumnal palettes and hints of brass soon followed. Then there was Mr. Walters, who taught watercolors at the Garden City High School adult education classes and finally, Margit Beck. Margit was an abstract painter with work in museum collections and a serious pedigree. She was Hungarian with a white bob and a severe, humorless manner. About 15 years older than my mother, she took in adult students at her home in Great Neck. 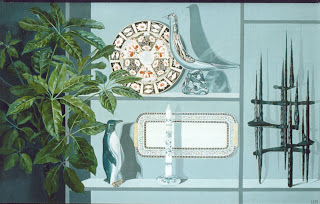 My mother began to get more ambitious about her art. Her work during this time was primarily interior studies, starting with images of Margit’s kitchen and then became increasingly exact, in an abstracted, yet realistic style. In one suburban gallery where my mother was showing, Margit tells me, sotto voce, “This show should have been in the city.” meaning Manhattan. Her ultimate compliment, but an indictment of sorts, too. 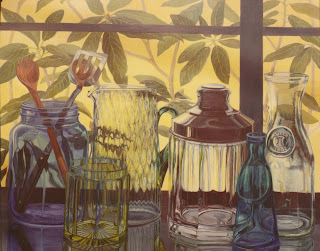 As my mother aged, she occasionally voiced a desire to work with watercolors more. When she said this, we both knew that she really was not talking about the medium. She was talking about making art that was more expressive and less bound by her talent and skill for representation. Part of her longed to create something more ineffable than a well crafted painting. I would have loved to see her paint more “watercolors” too. But I often think of how she lived as an artist in post-war suburbia. I think she always knew what she was gave up and what she gained from a suburban life. As much as she revered artists and artisans of varied styles and cultures, she never seemed to have the ambition for herself that her contemporary male artists possessed. Margit was the closest, best role model, but perhaps it came too late. I think of her 2 younger twin cousins, Jerome and Joel-Peter Witkin, who both went on to pursue very successful careers in the arts, as a painter and photographer, respectively. They too grew up in a poor household without the means or inclination to nurture artists, and yet they managed to fuel larger dreams.

Sometimes when I reflect upon my mother as an artist, I lament her creative outlets. I wish she had channeled all her talents and unleashed all her passions into her art. She had the persistence and will to work hard. What she didn’t have and never got is so much more difficult to name. Yes, she was praised for her talent, but was there enough encouragement or expectations that she could make art in a man’s world? Where was the confidence needed to make the leap from suburban artist to New York artist? And even if she had continued to work without participating or succeeding in the larger world, where was the permission to dream bigger? I know ideally that we shouldn’t need anyone to give us permission, but there are so many subliminal messages in our culture and in our personal histories that thwart us. These messages shaped my mother’s choices. She chose to direct her creativity towards pleasing others in safe, conventional ways, even for herself. I believe she wanted a more emotional connection to her work, but perhaps there were conflicts that prevented her from imagining that scenario. What would have been the consequence of a more selfish but deeper creative practice? Maybe she felt it was an indulgence to imagine a life following wherever her imagination led. Her self- imposed limits might seem inconsequential because of what she did accomplish, but I see it another way. I see a woman who could have made a mark in the larger world but didn’t have the resources needed to get there.

For the many women I know who are artists today, I only wish for you to be heard and recognized.  If you have a desire to express yourself, don’t minimize your talent and sublimate your ambitions.The world needs to hear your voice, especially our daughters.

This post originally appeared on the Art Cricket LA blog in November 2014.

Posted by Lorraine Heitzman at 11:32 PM